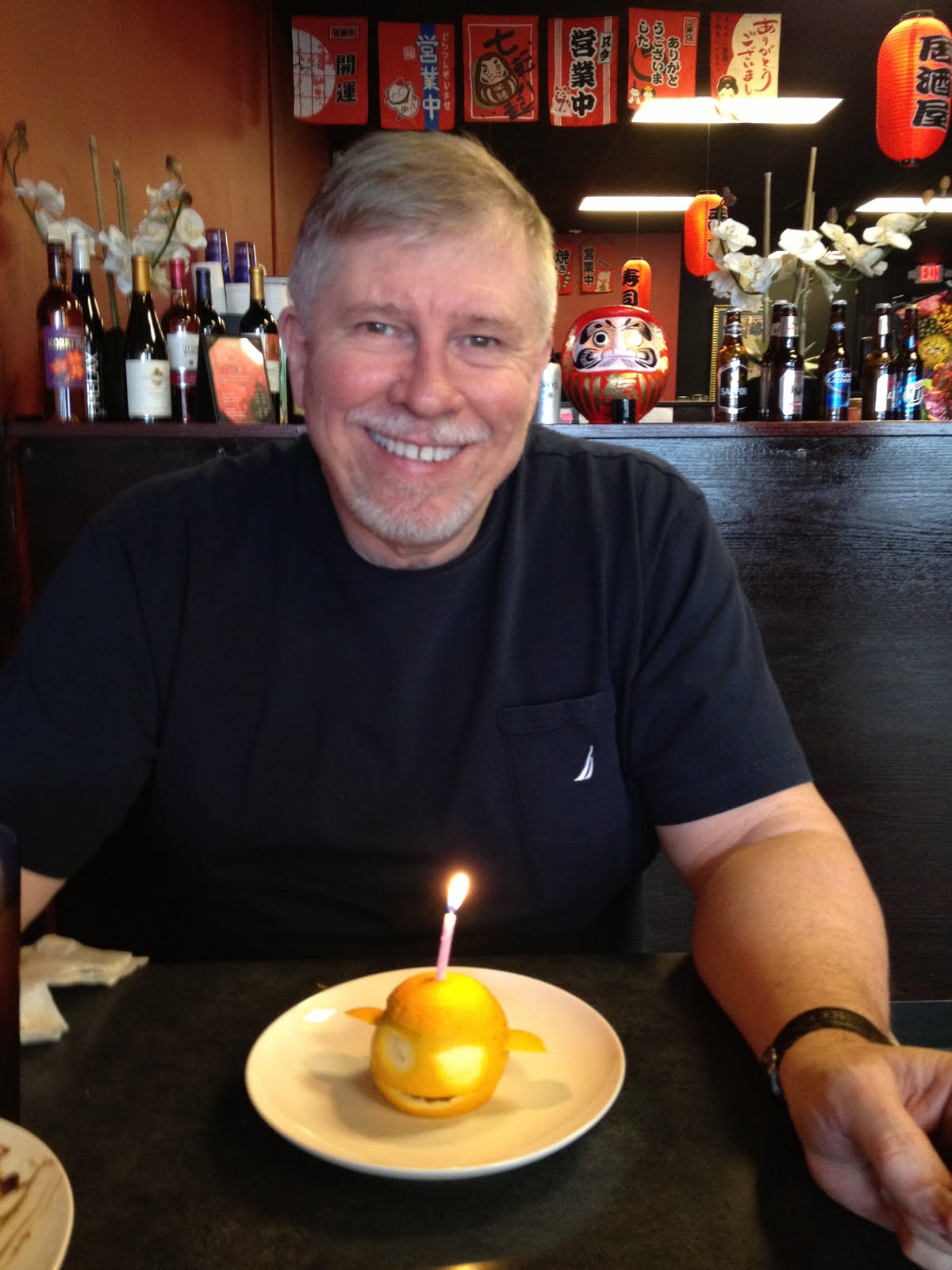 Cap Parlier
Cap is an author of several books, as well as numerous essays and articles. Cap's books, writing, biography and other items of interest can be found at his website: http://www.parlier.com or contact him at: cap@parlier.com 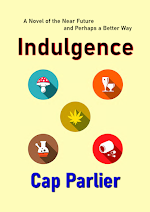 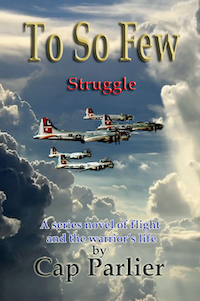 To So Few - Struggle 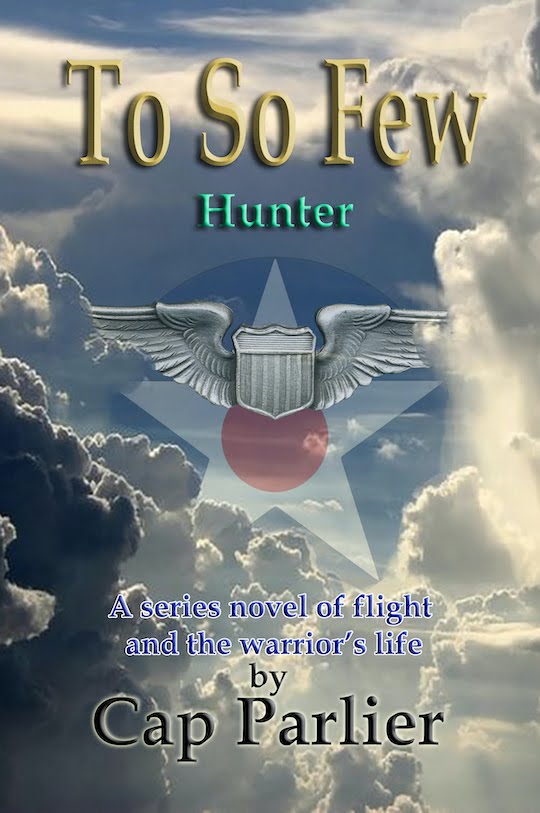 To So Few - Book VIII - Hunter 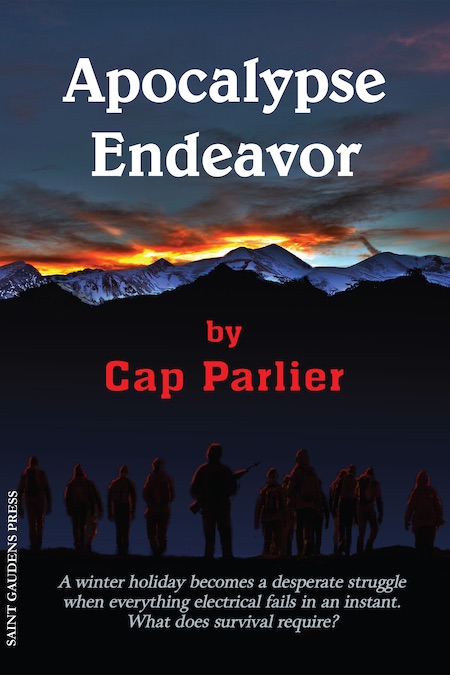 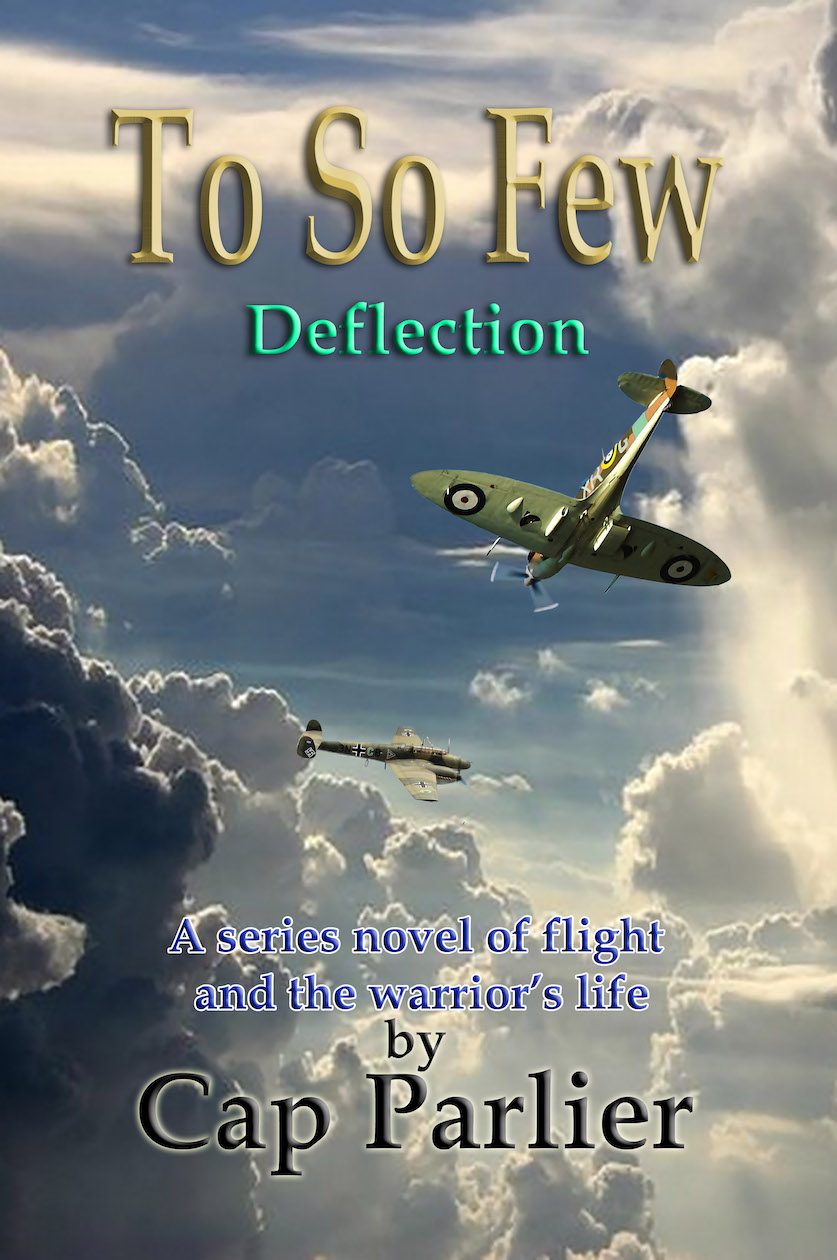 To So Few -- Deflection

To So Few - Book VI - Frustration 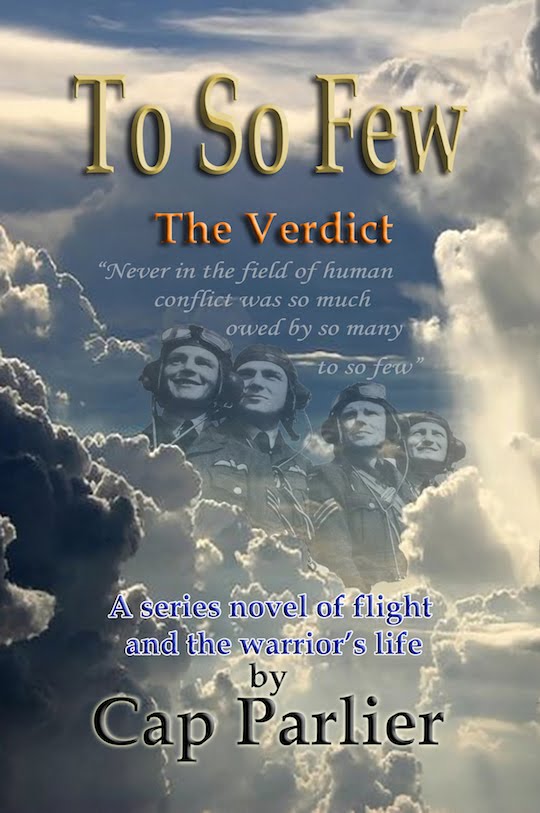 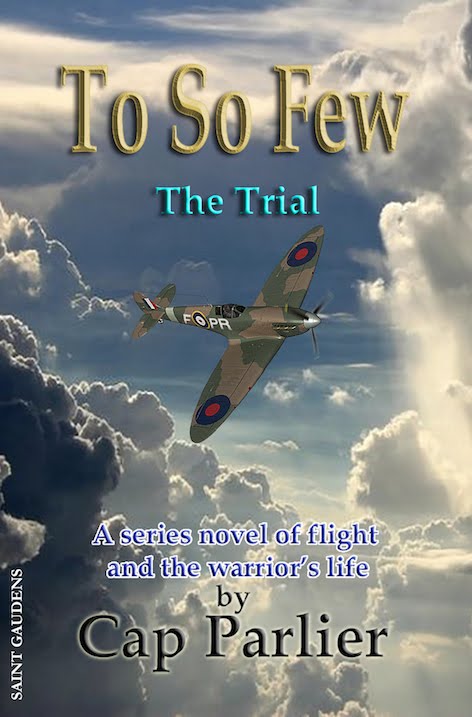 The Clarity of Hindsight

To So Few - Book III - Explosion

To So Few - Book I - In the Beginning

Update from the Sunland

Another must-see television documentary aired this week. This one entailed a surprisingly balanced assessment of conspiracy theorists, especially as they apply to contemporary politics in this once grand republic. CNN broadcast “This is Life” with Lisa Ling, titled: “The Conspiracy Effect” (S8 Ep4). I have known elements of the program, but I learned considerably more, e.g., with mounting constraints on QAnon for their false information, the believers formed an offshoot known as Parler. The new misinformation/conspiracy website is way too close to my family name. The program offers a reasonable perspective regarding the genesis of conspiracy theories we must unscramble in today’s politics. Please watch it.

I cannot imagine how Garland does not bring formal prosecution, conviction, and prison time for Bannon. If he is convicted, I hope and trust he will get the maximum sentence. Bannon’s full and absolute pardon by [the person who shall no longer be named] in the last hours of his presidency does not cover crimes committed after the pardon. This should be low-hanging fruit that can be made quick work of in court. Unfortunately, nothing is simple in Washington, DC.

-- The Arizona state senate fBICP members independently agreed to spend millions of dollars of taxpayer money and commit Maricopa County to spend more millions they did not control [1011].

by Bob Christie and Christina A. Cassidy

After months of a “fraudit” the fBICP controlled, 182 identified potentially fraudulent votes among a total of 3,387,326 votes cast were referred for further investigation and possibly prosecution. There was a 10,457-vote difference in Arizona between the two leading candidates. So, let us assume all 182 questionable votes were in fact fraudulent, and further that all of them were illegally cast for the winner of the election; that is 0.017%—a very long way from even remotely affecting the outcome. All that said, one fraudulent vote is too many. However, this is a serious diminishing return matter. The fBICP approach: spend millions of dollars more on 0.017% and worse, restrict voting access, which just happens to affect primarily those who do not vote for them anyway. What the fBICP is doing in Arizona and many other states is blatantly wrong in the most cynical way. And, they vote against any attempt to prevent such barefaced voter suppression activities.

Statement by [the person who shall no longer be named],

45th President of the United States of America

Wonderful to see Colin Powell, who made big mistakes on Iraq and famously, so-called weapons of mass destruction, be treated in death so beautifully by the Fake News Media. Hope that happens to me someday. He was a classic RINO, if even that, always being the first to attack other Republicans. He made plenty of mistakes, but anyway, may he rest in peace!

To which, Maggie Haberman tweeted:

Given the chance to be gracious about someone’s death, or say nothing at all, [the person who shall no longer be named] takes a decidedly different route.

The [expletives (plural) deleted] bone-spur draft dodger has no right whatsoever to disparage a man who has stood watch in harm’s way at the gates keeping us safe and committed his entire life to the service of this once grand republic. Haberman was overly gentle in her criticism. Sabato was closer to spot on.

Seventy-four million American citizens want this asshole to represent this once grand republic and especially to represent them. That fact alone speaks volumes to me. Worse, a good chunk of that lot wants to re-elect him by whatever means possible (legal or illegal), if they are not successful with their continued efforts to complete a coup d’état.  To this very day, they yammer on about returning their hero to the Oval Office. At first it was next month, then it was August, and now it is next year. The Constitution is irrelevant to them. The malignancy that [the person who shall no longer be named] represents in the flesh will not easily be excised or cured.

I suspect most Americans do not know or are even remotely aware of history, which makes it very difficult to convey the historical significance of contemporary events. The NationalSozialistische Deutsche ArbeiterPartei (NSDAP) [National Socialist German Workers Party AKA Nazis] employed a large, widespread, quasi-militia group known as the StrumAbteilung (SA) [storm troop AKA brown shirts] to intimidate German citizens by a wide variety of means into compliance with the dicta of the SA. The threatened, assaulted, beat, and even killed those who dare defy their coercion efforts. The SA received their directions and orders directly from the NSDAP leadership, i.e., Adolf Hitler.

I have used the comparison between [the person who shall no longer be named] and the Nazis because the similarities far exceed the differences. Yes, there are distinct differences, e.g., [the person who shall no longer be named] has nowhere near the charisma and leadership skills of Adolf Hitler. To my knowledge, the brown shirts of the fBICP do not wear uniforms, although their abundant use of flags is about as close as you can get short of outright uniforms. Like the Antifa boogeymen the rightwingers love to point at for everything they condemn, the fBICP brown shirts are an amorphous group with little discernible structure or leadership. Yet, the fBICP brown shirts have brought low our political discourse, and they are desperately intent upon taking us far lower. This is today’s conservatism, although I think that reality does serious injustice to the noble term. What we bear witness to today has absolutely nothing to do with classic conservatism. They are intimidating state secretaries of state, election officials, school board members in a direct effort to convince them to resign, leave, disappear or not interfere. They want to bludgeon them into compliance with their wishes or replace them with friendly individuals. The fBICP controlled state legislatures are doing their part by changing voting laws for everything from restricting access to absentee ballots, post office and ballot drop boxes, gerrymandering, polling station hours, et cetera ad infinitum ad nauseum. They are also creating ways that fBICP controlled legislatures can invalidate votes or do their own vote counting outside the voting apparatus. They are frantic to compensate for the reality that they are a diminishing minority. We are way too close to 1933 for my liking. I must hope and trust we collectively overcome this obscene political movement before it is too late.

When [the person who shall no longer be named] was banished from most social media platforms after the 6thJanuary Insurrection [991], he decided he would not be silenced.

The [person who shall no longer be named] Media & Technology Group has been created along with its associated “Truth Social" application. I surmise he chose the name so he can called his false, injurious messages “truthgrams” or some such. Here, we have yet another comparison to Nazi Germany. In 1923, Hitler bought a Munich newspaper and renamed it Völkischer Beobachter (People’s Observer). The Nazis published a daily edition of their propaganda rag and distributed it nationally until the collapse of Nazi Germany in April 1945. Sadly, we cannot get the man to shut up and disappear. We do not need to hear another word from that man.

CNN hosted and Anderson Cooper moderated another presidential town hall in Baltimore, Maryland, on Thursday, 21.October.2021. President Biden offered moments of rhetorical genius mixed with instances of halting, broken speech. Criticism of his rhetorical skills aside, President Biden is such a refreshing change from what we had to endure during the last administration. It is reassuring to watch a president who has compassion for others and especially the less fortunate, and he does not malign those who disagree with him on policy. At least he has a policy to speak about real issues during these events. He responds well to people and their concerns. Thank you President Biden for being a monumentally better man than your predecessor.

Comments and contributions from Update no.1031:

“I am aware of the MOSAIC expedition, and I look forward to learning what they have learned. PBS typically has their shows as "members only" in the ways I could access them.

“I lived in Deep East Texas off and on in the 1980s. Their rapid regression to barbarism doesn't surprise me.”

My response to the Blog:

I have never been a PBS member or supporter. Most of their programming does not particularly interest me, but NOVA always has. I do believe you can find the program on streaming services without subscribing. Anyway, you have the information; do what you will.

I cannot claim as deep an understanding of the “Deep East Texas” mindset, but I do have an appreciation for the phenomenon. My appreciation aside, the regression represented by the current Texas administration is disappointing and depressing. Why? It is staggering that American citizens could be cajoled into believing and supporting this absurdity.

“I may look around for the PBS shows. There are several I could watch, but TV is just not a priority.

“Lifelong immersion, cognitive bias, and social and/or geographic isolation go a long way toward explaining some Texans' bizarre mindsets. Neither research nor logic has much to do with it.”

Good luck. It is a very good program.

I bow to your direct experience and observations. My disappointment persists.

My very best wishes to all.  Take care of yourselves and each other.